Do good looking people have it all?

They say “don’t judge a book by its cover” but how many people actually follow this advice?

The halo effect is a cognitive bias well known in the field of psychology which manifests itself as the tendency to form your initial impression of someone’s character based on their physical appearance.

In this case, known personal characteristics such as beauty influence the perception of unknown or unrelated characteristics which are inferred without concrete evidence.

In this post we will explore how your physical attractiveness (or lack of) influences the way others perceive you and thus, how they treat you. The halo effect also has other applications in marketing and business contexts but we won’t cover those here.

An important implication of the halo effect is that positive and negative traits are believed to come together in the same person.

If you are attractive, then you are probably also kind, creative, intelligent, trustworthy, competent, and so on.

If you are unattractive, then you are probably also lazy, mean, unintelligent, untrustworthy, incompetent and so on.

These are subconscious judgments not necessarily based in reality.

It does not mean that they are an accurate reflection of who you are.

So, like an angel with a ringed halo above its head radiating a heavenly light, a person’s beauty radiates a positive halo on their personality, behavior, and mannerisms, casting them in a favorable light and warping our perception of who they really are.

You often see this in simplistic forms of fiction. The bad guy or villain is portrayed as ugly and evil with no redeemable qualities while the good guy or hero is portrayed as noble and beautiful, righteous and easy on the eyes. That’s how you know who you’re supposed to root for…

But all jokes aside, real life like good fiction, is not that simple.

A Brief History of The Halo Effect

Edward L. Thorndike, a researcher and psychologist from Columbia University, was the first to describe this phenomena in his paper, “A Constant Error in Psychological Ratings” published in 1920.

In two separate experiments, Mr. Thorndike observed superiors erroneously rate their subordinates. He wanted to see how one quality influenced the assessment of other qualities in the same person.

The first experiment in 1915 had employees from two industrial corporations rated on traits like intelligence, technical skill, and reliability.

The results of the experiment were unusual. All of the positive traits were highly correlated with other positive traits – and the same was true for all of the negative traits. In other words, if the person rating felt the employee was generally good, they rated them positively across all categories. And if they felt the employee was generally bad, they rated them negatively across all categories.

Mr. Thorndike noted the correlation between unrelated positive and negative traits was “too high and too even.”

The second experiment had similar results. This time, commanding officers in the military rated their subordinate servicemen in categories like loyalty, leadership, dependability, and physique.

The effect of physical presence was especially notable.

Taller and more handsome officers were rated as smarter and better soldiers.

Does this make practical sense?

Why would someone taller also be smarter? What do looks have to do with combat readiness? It appears, based on the results of these experiments and further research that has since been conducted, that people naturally “fill in the blanks” and simplify others into neat black and white categories based on superficial, flawed reasoning. They take one favorable trait and extrapolate from there to form a positive impression of someone’s entire character.

These experiments were further repeated with schoolteachers and aviation officers.

We will now explore how this bias and the stereotypes it creates affects people across different domains.

In the United States, discrimination based on physical attractiveness isn’t protected by federal law like age, gender, or race.

That doesn’t mean it doesn’t exist.

Applicants with scars, birthmarks, or other visible facial disfigurements are rated more poorly in face-to-face job interviews. Why? Their interviewers remember less information about them. Eye tracking technology reveals that they spend more time on the person’s blemish which serves as a distraction during the interview. This leads to poorer evaluations for these candidates although they can be just as qualified for the job as others.

We all know first impressions count. The more likable you are, the more likely it is you get hired. It doesn’t hurt that attractive people are naturally seen as more likable and trustworthy people.

Attractive candidates are also offered higher salaries. And if you’re a man, the taller you are, the more likely you are to be promoted and become a CEO when compared to shorter men (PDF link).

If you’re a politician this means you’re also more likely to get elected into office.

It doesn’t end there.

For jobs stereotyped as traditionally masculine, handsome men, more often than not, are the preferred candidate. And for jobs stereotyped as traditionally feminine, the same holds true for a pretty woman. A double dose of sexism and looks discrimination! Even if the job role is classified as gender neutral, attractive applicants are (unsurprisingly) still favored over unattractive ones (source).

Researchers call this the “beauty is good” stereotype (see this PDF paper for more).

All of these examples show the many ways it pays to be good looking. We assume the person is more competent and throw money at them oftentimes for stated reasons OTHER than the real reason, their attractiveness. But there are also instances where good looks are a disadvantage. We will cover these instances further below in the “Reverse Halo Effect” section.

Men are more likely to rate an essay supposedly written by a beautiful female author higher than if an unattractive female author was believed to have written the same essay.

“…earn significantly lower grades in online courses than those in traditional courses, a finding driven mainly by courses taught by male instructors.“

How do you explain the male instructors being most guilty for this bias? Taking the results of the studies discussed so far, it seems men are more easily swayed by looks than women. Yes, we know, we know… surprise! But it’s not like women are immune to this bias. They are certainly capable of misjudging people as demonstrated thus far although perhaps in a different, less pronounced way then men are.

An interesting side note is that both below-average and above-average looking female students were found to earn lower grades in that study. Good news if you’re average!

In one part of the study, researchers took photographs of 194 female and 166 male undergrads which were then rated by 19 psychology students for intelligence, attractiveness and sexual dimorphism (aka how masculine or feminine the faces are). Composite images were then generated to form the average “intelligent” and “unintelligent” face for each sex. The findings?

The law is lenient when you’re beautiful.

Even though 93% of people polled said a person’s physical appearance shouldn’t bias the decision of jurors whereas 79% said their character and personal history should, in a simulated jury task…

Another study looked at how people punished hypothetical defendants based on the crime committed and the perpetrator’s physical attractiveness.

The offending factor seems to be that the attractive person took advantage of their looks to seduce and persuade others in trusting them for their unfair advantage.

What does this tell us about the way people think? Justice is most certainly not blind.

The reverse halo effect is when an attractive person is judged to have certain less favorable traits although the term is sometimes used interchangeably with the “horn effect” or “devil effect” which as counterparts to a halo, are often applied to describe the effects of negative traits on other unrelated traits.

An example is that unattractive people are more likely to be considered social deviants, politically radical, and psychologically disturbed.

Even positive impressions can work against you in certain situations. Here are some instances:

This bias has been coined the “beauty is beastly” effect by some researchers to show that beauty is not always “good” in every situation.

What This Means For You

Okay seriously. Think of your favorite celebrity – a perfect example of the attractiveness halo in action. That heartthrob actor or actress you love watching may not really be good at acting at all… You just think they’re attractive and judge them as better at their profession.

You’re under the spell of the halo effect – a confirmation bias persuading you with limited information.

What’s clear is we’re not all playing on an even playing field. Does that mean you mope around feeling bad for yourself? No, you get to work and improve to become better. You maximize your potential and people’s first impressions of you change for the better. 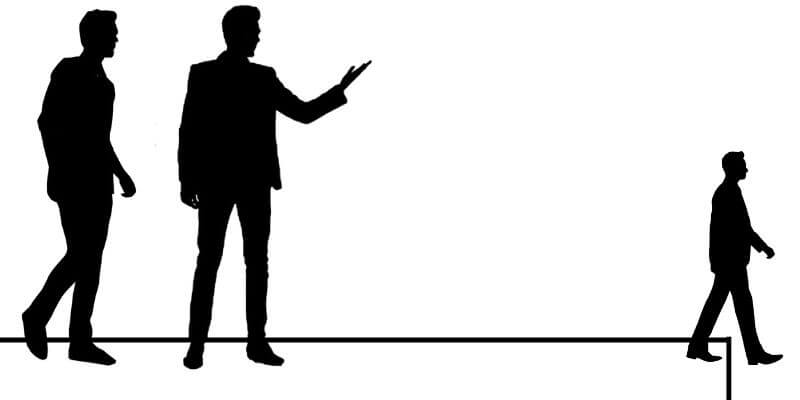